It’s been a long process, much longer than we would’ve liked, but OpenPNM Version 3.0 is finally here. Version 2.0 was released in August 2018, and version 2.8.2, the last of the V2 series, was released in September 2021. This 3 year stretch saw a lot growth in the OpenPNM userbase, which if we use the Github star count as a proxy, showed a 300% increase over the period! 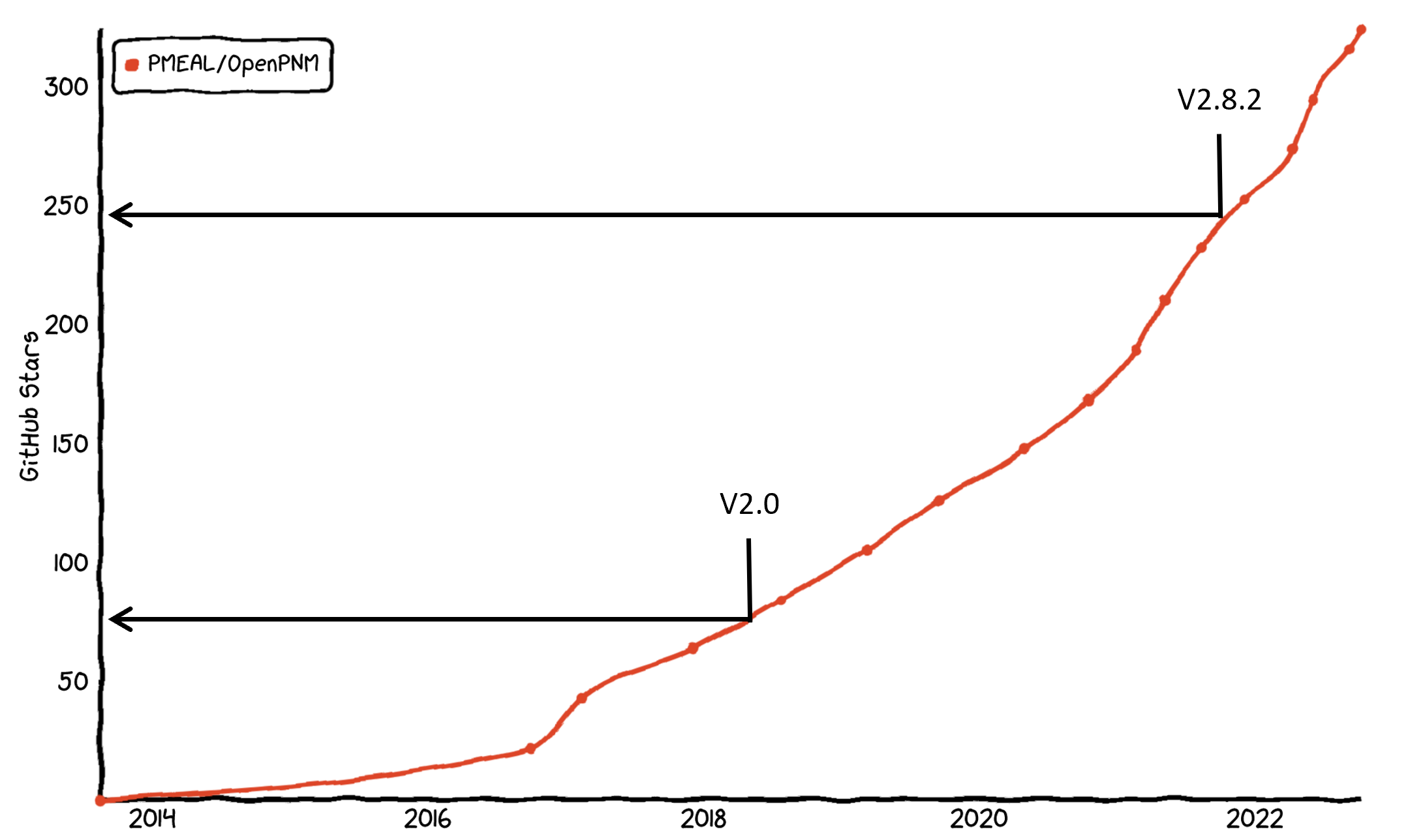 A lot has happened over these four years, and it’s been quite a blur so it’s hard to remember which milestones to highlight. One major event or theme was the PMEAL group receiving funding from CANARIE to support the growth of OpenPNM (and PoreSpy). This funding allowed for the hiring of many highly talented students who really took OpenPNM to the next level.

Overview of the Biggest Change¶

There have been a LOT of useful and powerful additions to V3, but perhaps the biggest change is what’s missing:

V3 has removed the concept of Geometry and Physics objects. This “workflow” was invented on the whiteboard during our initial planning sessions for V1 in 2011, and looked sensible at the time, but over the past 10+ years it became clear that this created a lot of confusion for users and a friction for the developers.

For comparison let’s look at how this changes the scripts. In version 2 you’d initialize 4 objects:

While in version 3 the same result is obtained as follows:

Back End Simplicity: The ‘back-end’ code complexity was massively reduced, which will make it far easier to maintain OpenPNM moving forward. There was quite a lot of machinery dedicated to tracking which pores and throats were assigned to geo, and that phys was associated with geo. For instance, in cases where multiple domains were used, such as geo1 and geo2 a lot of checks were done behind the scenes to ensure they did not conflict with each other and that all pores and throats were accounted for. There was also functionality required for ‘redefining’ which pores and throats they were applied to, and so on. Easily thousands of lines of code were deleted by this change.

Fewer Objects to Think About: Speaking of multiple domains, most users probably did not use this capability, but for those who did, this change will result in a much simpler experience. In most cases the effects of multiple domains are only relevant to geometries, so one might specify geo1 and geo2 each with different pore size distributions, but probably the same physics applied to each domain. In the old approach, you had to create a unique Physics object associated with each subdomain, but now you can just add a single set of physics models to a phase and they can apply everywhere.

Emphasizes Pore-Scale Models: Although we’ve attempted to make this new approach as smooth as possible, there is no such thing as a free lunch, and the user must still invest some effort in defining which models to assign (and where). We have created collections to facilitate this process, which are demonstrated above. In V2 when you initialized a StickAndBall object it added all the models as part of the initialization. In V3 you create a network, then add all the models yourself, which is where the collections come in handy. A positive take of this new approach is that users are now forced interact with pore-scale models, which are the foundation of OpenPNM’s calculations, so hopefully this encourage them to write and use their own models.

Easy Multidomain Control: We have created a new way defining multiple domains, or more to the point, we created a way to assign different pore-scale models to specific pores. In the pn.models dictionary you will find all the models defined on the network, but now each model name also includes the domain where it applies, so instead of 'pore.diameter', it’s 'pore.diameter@<xyz>', where @ is a delimiter and <xyz> is the name of a label on the network. The default is '@all', meaning the model applies everywhere. To create two domains with different pore sizes you now define different models such as pn.models['pore.diameter@domain1'] and pn.models['pore.diameter@domain2']. Conveniently, you don’t need to specify different models for other properties like 'pore.volume' (unless you want to).

The best way to illustrate this change is by example. The code snippets below will create a domain with 2 different pore sizes, but all other models the same. It will then change the domains so that different pores are assigned to each domain. Now let’s retrieve the stick_and_ball geometry model collection, create a copy, alter the pore sizes on them, then assign each to different pores:

Let’s replace the model used for computing the pore diameter with a random number between some limits, which we’ll use to create a layer of small and large pores. This new approach may take some getting used to, but hopefully it has enough upsides to make it worth it. We don’t dive into all of these here, but let’s just look at one feature which will hopefully make it clear why this new approach simplifies the back-end. Lets change which pores belong to domain1 and domain2 just by adjusting the labels. In the previous version this required calls to the set_locations methods of all the geometry objects. In V3 we just need to change some pore labels and regenerate the models: The key here, from a back-end perspective is that OpenPNM did literally nothing behind the scenes. Only the labels were changed by the user, and OpenPNM just adapted.

There have been a handful of other breaking changes including:

During this past 3 years we’ve also migrated all of our continuous integration testing and release process to Github Actions. One of the great side effects of this that we can now generate very detailed changelogs from the commit messages for each merge onto the dev branch. The full change can be viewed here.